In the photograph above she uses Xs to identify a woman with a child on her knee and the man standing behind her. It’s difficult to see the “Xs” at this resolution but there are bigger versions in the Flickr album I’ve created of the whole collection. This couple must be the Dana’s parents as she tells us on the reverse “My mam with me on her knee Dad on the back row.” 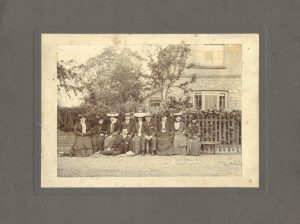 Here’s another example of how Dana tells us that this is “My grandma with X on her chest.” 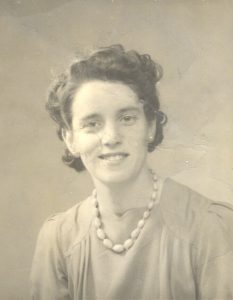 Betty appears three times, once with Marjorie at Batley. Betty’s surname is given as “Raynor” on one of the photos. Is she Dana’s sister? 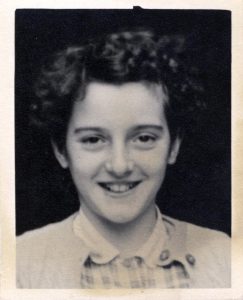 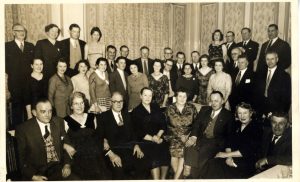 Marjorie appears three times, once with Betty. Note there’s an “X” again to identify Marjorie in the group photo.

The family dogs are not forgotten – here we see Dinkie, Rinty and Blackie. 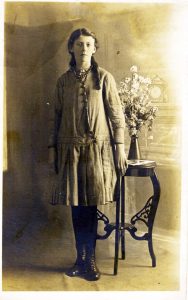 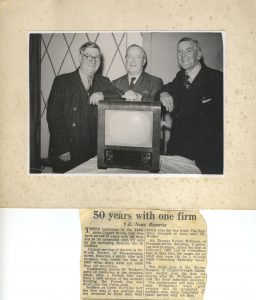 I was hoping one of these gentlemen would turn out to be Dana’s father but she’s written on the back “John’s Father with his workmates from Yorkshire Copper Works.” There’s no clue as to who John is so it doesn’t help. Nevertheless the newspaper clipping provides fascinating detail.

Overall the collection illustrates some of the frustrations of collecting old photographs. Clearly there are intriguing stories behind them but nothing to definitively identify the subjects. From the notes and photography studio stamps we can place them in and around Leeds. Otherwise we can only be grateful for Dana’s “X”s to at least show some of the relationships.