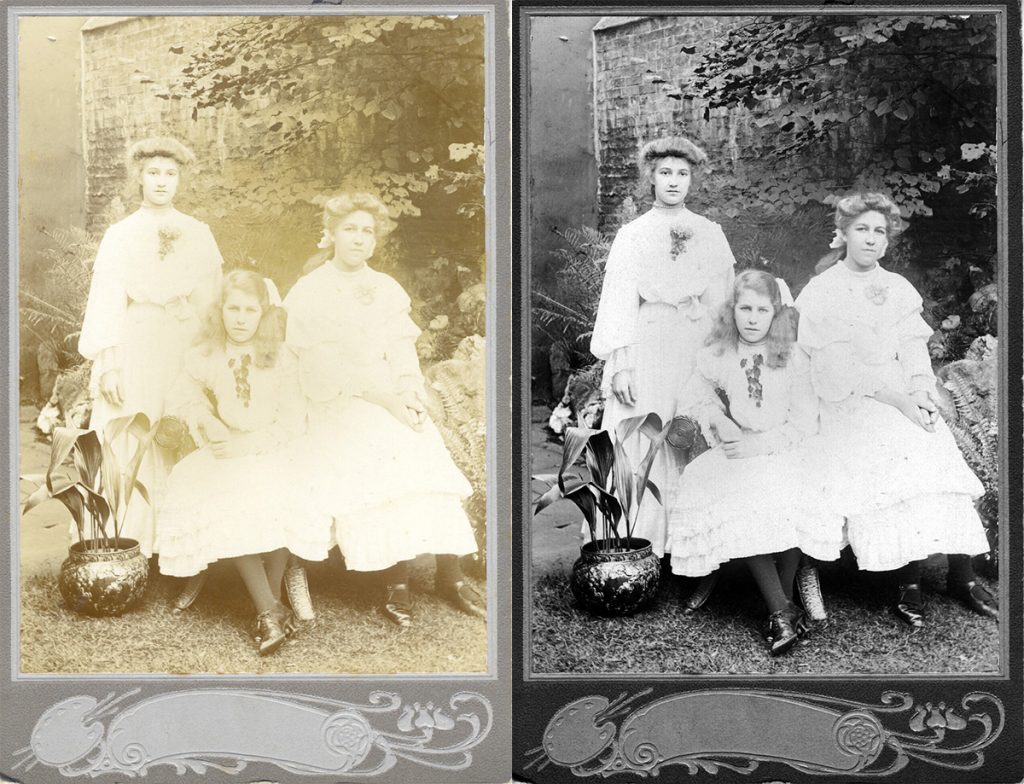 Often Cabinet Cards and other old photographs are not in great condition when I acquire them. The question is then what to do with them. As far as the originals are concerned it’s just a matter of storing them in a suitable dry place out of direct sunlight but when it comes to displaying them digitally then I usually make some alterations to the scans. Most frequently I use Photoshop’s autotone feature as it usually brings out more detail and enhances the blacks in particular.

In the case of Gerty Grace and Elsie, a cabbinet card dated on the reverse as December 7th 1905, I went a little further. After autotoning the scan I opened it up in Nik’s Silver Efex Pro 2 and did some further tweaking. In this case I brightened a rough circle in the centre of the photograph over the girls’ dresses as there was some fading in this area on the original photograph.

Ideally I would like scans to be as near to the original as possible and that would include the sepia toning but, on the other hand, greater detail is revealed when the black and white conversion is viewed. I still have the card so nothing has been done to destroy the original.

For this cabinet card of a girl with a fan I have carried out more restoration on the scanned image. Often photographs of this age suffer from foxing – the appearance of brown patches as seen above left. I removed the foxing using the healing brush tool again though I could have spent more time on this to get even better results as a little of the detail on the dress has been lost during the process. I applied a high structure filter in Silver Efex to arrive at the finished image. You can see how much more detail this has revealed, especially in the background objects and furnishings. You could argue that this version has taken it too far but the beauty of doing this is that I can always go back to the original scan and produce a different version.